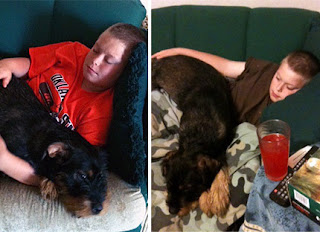 Amy would not leave Dylon’s side after his surgery.  He was laid up for a week and she stayed by his side the entire time.  Her favorite place is laying on Dylon…but I did finally get her to lay beside him.  She has her own little couch and I finally moved over by him…but if he made any noise she was up and checking on him.  Dyl and Amy love to play fetch and tug-a-war.  She will bring the ball or chew rope over to him when she wants to play.  To tell a funny story on them…Dyl was tired so he laid down and put the chew rope under him…Amy couldn’t get to it so she sat on his face…that was a good laugh for hours… The bond between the two is very strong.  I am so happy that we have Amy in our family.  She is very smart and her personality is just a joy to be around. She still likes to chew up my flip-flops…but I needed new ones anyways…lol.  Thank you so much for Amy.
Jaylene and Dylon Smith