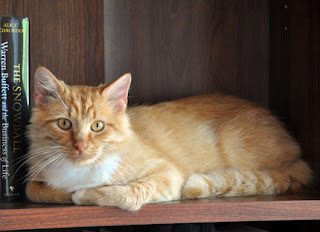 When Benny came home, he became Galen.  With Galen’s laid back personality, it didn’t take him more than a couple of hours to adjust to his new surroundings.  The two and a half month old kitten, Vanya, that I had here already didn’t appreciate Galen’s presence, but he was patient with her.  He remained subdued until she was ready to start playing.  That always turned out interesting, since Galen is almost 15lbs and Vanya is closer to 4lbs!  These two get along fine now, and they especially love sprinting around my living space in the early hours of the morning.  Galen has remained the stable, relaxed cat in the house, able to flow with whatever changes I throw his way.  He’s a great addition to my household which wouldn’t have happened without you guys!  Thank you!