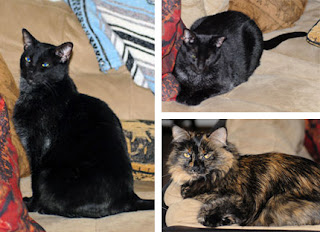 The day I wondered into your facility I was still morning him (Bubba) somewhat but knew I had to move on.  I looked at all the black cats you had as well as a few others that caught my eye, and then traveled to the back of the building and saw a few.  I then happened upon a 6 year old cat that I was told had been there a long time and that his age might have something to do with it.  I watched him for a bit, petted him, and looked deep into his beautiful blueish green eyes.  He almost appeared to be smiling.  I liked something about him as soon as he started to purrrrr.  After a short period of spending some time petting a lot of your cats I just couldn’t make up my mind and decided to go home and think about it.  I could not get Jack off of my mind.  For several nights I tossed and turned thinking about whether or not I was ready for another cat to take the place of Bubba and another black cat to boot; however, I love black cats as they seem to be evenly tempered.  The next day I had made up my mind and none of the felines in your facility caught my attention the way that Jack did with those beautiful blueish green eyes and his purrrrrrrr.  The day I came to get him was interesting as when we got home he quickly made friends with my other cat Snickers and settled in as if he had been here all of his life.

The first few weeks were a battle back and forth over who could be in my arms or on my bed with me but finally they both quieted down.  I had Jack’s front claws removed as he started clawing up my couch and a bad tooth looked at, but other than that he is a sweet, loving, cat who is always right beside me if Snickers is no where to be found.  Snickers is the matriarch of the household and occasionally establishes or reinforces that to Jack even though it doesn’t really seem to sway Jack one way or the other.  He is a wonderful cat and I have grown very attached to him.

Because you called and checked up on him several times after I adopted him, I thought that I would relay this information to put your minds at ease as Jack is very happy, well adjusted and adorable and will have a home with me and Snickers as long as he is alive.  I have sent a few photos of him that were taken last week that I thought you might enjoy and have included a picture of his partner in crime Snickers (Calico).