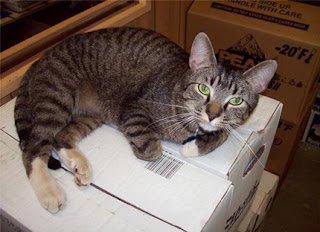 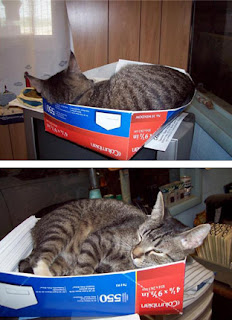 Dear S.P.C.A. Enid,
I adopted a cat named Socks for my husband for Christmas, because his beloved Jake (tiger striped yellow cat) vanished on Dec. 3rd, 2009. Jake weighed 16 lbs when he disappeared (not fat, just big). Amazingly 4 months later and seven miles away a 10 lb. Jake found someone he knew who also knew him, and he was returned. He had been gone over the coldest months of winter. We own a small business and Jake was and is a celebrity here. Anyway, Socks (now known as Jasper) had settled in very nicely, and we love him dearly. We already had a smaller female (Josie) so now we have one big happy family. Jake is an extremely tolerant cat, and Jasper was a little shy of him for awhile, but now they all play together nicely. Yes, they are all altered, and we are thrilled beyond words to have all three of them. I am sending pics of Jasper.