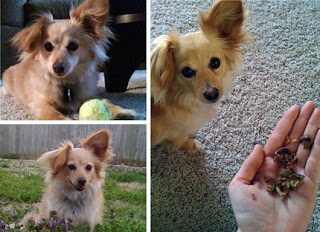 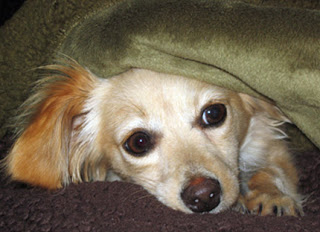 This is Joie (formerly named Foxy). I came across her picture from a friend of mine who lives in Enid. I had been looking to adopt for about a year but hadn’t found the “right one”. The minute I saw her picture, I was in love. I visited the Enid SPCA to spend some time with her and observe her behavior and personality. She was the sweetest, most calm puppy I had ever been around. A week later, Joie came home! It has been 9 months now since Joie’s adoption, and it has been quite memorable.
Some of Joie’s hobbies include the dog park (she is very social), going for walks, chasing her tennis ball, chewing on bones, and of course eating bugs! We completed a basic obedience course in November where she learned to sit, lay down and stay. She also got to do some agility exercises and we learned she was the fastest in the class, even beating the big dogs!
Two of Joie’s funniest characteristics are her ears, and her love for nuts. After about 2 months after her adoption one of her ears popped up while the other remained flat. It is the most peculiar thing, but so adorable!! Everyone remembers her because of her ears. I tell them it’s because she is half Chihuahua and half Dachshund and the line is directly down the middle of her head. She also loves to dig up pecans. She brings them in to show us, and then she cracks them open and eats the nut out of the shell. She hasn’t learned how to clean up the shell once she’s done yet. Maybe we’ll work on that!
Joie has been such a delight and I’m so grateful for the work of the Enid SPCA.
Thank you!
Alaina Newton