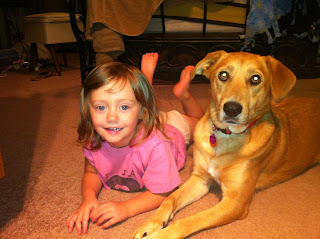 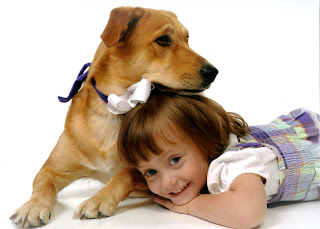 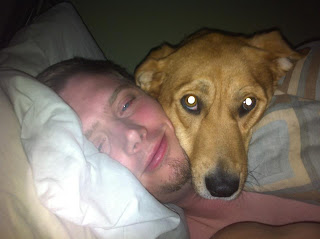 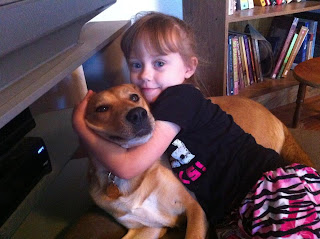 We adopted Lily from the Enid SPCA in the Fall of 2010. We had previously adopted a cat several years before and loved the experience. I had just left my career to be a full time stay at home Mom to our 18-month old daughter, Ruby, and I thought a dog would add a bit of security during the day when it was just us at home. Also Ruby absolutely LOVED dogs. Anytime we saw one in the neighborhood or out and about in town she just wanted to hug and love on them – no matter their size. When I first saw Lily she was still in quarantine as a new arrival. She just had the saddest face but she was was so calm and just sat there looking at me. They had her listed as a lab mix and seemed to be about medium-sized which was perfect for us. Lily was about 8 months old. We wanted a medium-sized dog that loved kids and could mostly stay indoors with us. When we first brought her home, Ruby couldn’t pronounce the name Lily so she became “Puppa” – something we still call her. I can’t tell you what a joy it has been to watch Lily and Ruby basically grow up together. Their relationship has grown into such a tight bond. That is Ruby’s dog, through and through. Lily is incredibly protective of Ruby, and they also have a bit of a sibling dynamic. They rough-house and chase each other all over the house, play in the bathtub together, cuddle on the couch and watch cartoons, and play endless games of fetch and tag in the backyard. I can’t describe the love between them – it is difficult to put into words. Watching them is hysterical and heartwarming. Lily can best be described as a gentle soul. We could kind of tell that she had been subjected to some sort of abuse before she was at the SPCA because training and discipline with her always resulted in cowering. At some point she had had a bad experience. We really had to get to know her personality before jumping into obedience training with her. Even now, we try not to worry too much about those things as her nature just does fit with following commands besides “sit” and being able to walk on a leash. We call her Princess Pup because she would rather be inside curled on your lap than anything. She loves having her paws massaged too. And we fully indulge her – she’s a pampered pooch. This summer we participated in the MotoPhoto fundraiser for SPCA. They capture many adorable shots including ones with them both wearing tu-tus! At one point the photographer tried to get both of their heads down on the floor next to each other. Lily instead made a little huff and rested her head on Ruby’s. The photographer snapped the photo and said “Wow. That was amazing.” The photo ended up winning 3rd place in the MotoPhoto contest. This one photo perfectly encapsulates their relationship. Thank you Enid SPCA for the quality of your adoption program. We continue to be impressed and humbled by the work you do in the community, and we will always do whatever we can to support your organization. Thank you for our sweet Lily and the joy she brings to our home on a daily basis!