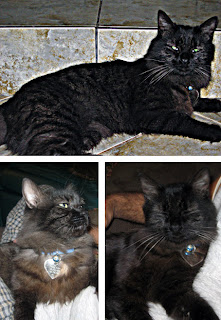 This is Rowdy (formerly Kang) the newest member of our family!  We adopted Rowdy in March of this year from the Enid SPCA.  I wanted to let you know what an absolutely wonderful addition to our family he has been.  From the beginning he has claimed Randy, my husband as his own.  The moment Randy comes home from work Rowdy demands his full attention.  He follows him where ever he goes and the moment he sits down, Rowdy is in his lap ready for Randy to pet him and play with him.  He is affectionate to both of us but Randy is who he truly prefers. He will come sit in my lap if I call him, but he never initiates it on his own. We have an older cat, Star, who is 13 years old, and she is very attached to me.  She spends most of her time in my lap, follows me from room to room and sleeps at the foot of the bed on my side, so Randy was delighted and a little surprised that Rowdy took such a shine to him.  He thought I was the cat person in the family!  Rowdy would like Star to be more playful and tries to entice her into games of chase or playing with the cat toys but Star doesn’t have the energy Rowdy has.  They get along well though and sleep together at the foot of the bed now, Star on my side, Rowdy on Randy’s side.  Since Star is too old to be much of a playmate, Randy got elected by Rowdy for that duty! He likes to sit in the windowsill behind the curtains and sneak up to the back of the couch behind Randy.  He bats Randy’s ear with his tail and that is his signal its time to play!  He loves chasing a stuffed mouse on a ribbon, or anything else for that matter.  Sometimes he will be sitting in Randy’s lap, quietly getting petted, and he suddenly jumps up, races to the bedroom, then races back to Randy’s lap at full speed.  We thoroughly enjoy his antics and he has been such a delight.  I never dreamed he would become so much “Randy’s cat” but that is what he is.  Randy is thrilled that Rowdy has chosen him and often teases me about Rowdy preferring him.  We are looking forward to many long years with Rowdy in our lives and want to thank the Enid SPCA for allowing us to adopt him.