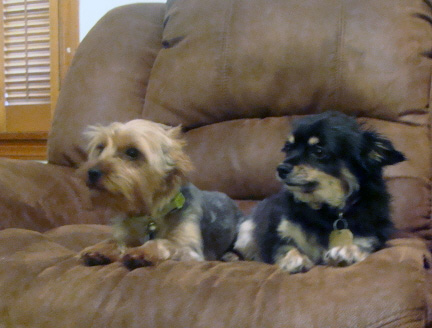 Buster is now Rusty because Buster and Boomer sounded so close we needed to make it where they could tell who we were talking about.  He is responding well to Rusty.
Just wanted to let you know that Rusty (aka Buster) is working out great!  We had a rough first week with him and our other dog, but now they are getting along great.  He loves playing with his new canine brother and just loves his 2 human brothers.  He likes to play ball and run around the yard with them.  We did find out that if you open the gate he will take off, so we are working on that.  He is good at baths and mom gave him his first haircut and he was a good boy he stood very still.  He uses the doggie door and knows he is to potty outside.  He has also figured out what the treat jar has in it.  We have just fallen in love with him and thought we would share a picture with you after we had our haircut and bath.
Thanks so much!
The Austin’s